The fallas are a popular festival which peaked between March the 16 and March the 19, the day of St. Joseph, Saint of the carpenters. The revel takes place in the streets and squares of Valencia and in more than sixty other cities in the province of Valencia.

The history of Las Fallas

The tradition started in the 15th century, when carpenters in honor of their patron  San 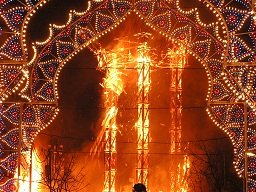 Jose used to celebrate the spring equinox by burning a device called Parot in the front of their door house. The object is a candle with several arms of logs or wood board that artisans used during the winter season to complete their work by candlelight. Later, they dressed it in the manner of scarecrows with a dress and shaped in the face of an important personality of the village.

In July, Valencian people elect a miss, the fallera mayor. Other falleras are elected to represent their neighborhood. As well, among children.

These events are preceded by an intensive period of preparation which is also a time to celebrate and party:

But what are las fallas exactly?

At each corner street, you can find a falla. It is like a giant statue made of wood, paper, cloth representing any scene of the daily life or political life in a humoristic way, like a satire. They are made by the 380 Casales falleros of all neighborhoods. Each casal (neighbourhood) exposes a  falla major for adults and a falla infantil for the kids, all in all 760 fallas are scattered around all Valencia.


They are manufactured in large workshops called falleros workshops and must be installed on March 15 (day called the plantà). A jury takes to see all the Fallas of Valencia and awards the prizes the next day. They will all be burnt on March 19 where they were planted. They only save the ninots indultat: figurines that each fallera mayor decides to keep from its falla, as a souvenir.