The mystery play of Elche 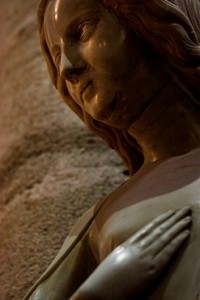 The Mystery of Elche is a sacred musical drama about the death, assumption and coronation of the Virgin Mary. Since the mid-fifteenth century you can attent a performance in the Basilica of Santa Maria or in the streets of the old city of Elche, in the Valencia region. It is a unique living play about European religious theater of the Middle Ages and the cult of the Virgin.

The event combines tradition and modernism. On the one hand, the theatrical performance is entirely sung and meet different influences : medieval ancestors, the basis of Renaissance and baroque ornaments, and posterior. In addition, the text is written in Valencian language, local form of Catalan, with some passages in Latin. On the other hand, the event brings together throughout the year a wide range of talent as more than 300 volunteers are involved not only in the performance itself as actors, singers, stage directors, stagehands, costumers and employees in stewardship but also in the preparations. This Assumptionist play is the only one in the world to be performed in a church thanks to a special privilege granted by the Pope Urban VIII.


Each year, the access to the performance of the 14 and the 15 of August is free. But for the public rehearsal of the 11, 12 and 13 of August, you should pay and better book a place. Every second year, special performances are also made during the month of October and November.

More informations about the Mystery of Elche perfomances