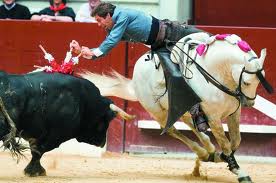 Did you think bullfighting and the bullrunning of the Saint Fermin were the only events where the man was "fighting" against a bull?
You were wrong. There is also the "Rejoneo" where a bullfighter on horseback, called Rejoneador, fights a bull.

The event takes place in an arena similar to the one used for the bullfight or in the same one as in Valencia where the two shows are held in the bulls square.


To win, the Rejoneador must cut one, two or three ears, and one tail from the bulls. At the end of the rejoneo, the Rejoneador go around the arena and takes a bow to the President of the celebration. If the bull was not brave enough, it is punished by the sentence of  2 or 3 rejones. This is a wooden spear of a meter or a meter and a half toppedby a steel blade which is used to kill the bull. The animal is thus subjected to the will of Rejoneador and finally put to death.