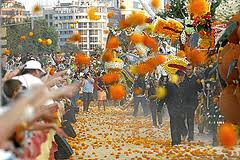 If the Tomatina, the famous tomato fight takes place in Buñol, the city of Valencia ends its July festival in a huge flowers fight. And of all events organized during the festival, it's this one that brings the most participants.

The custom was born in the aristocratic environment as a monstrance of wealth and has been transformed over time into a popular festival run by the festival committee of different neighborhoods (falleros), like the festival of the Fallas. The floats are sponsored by cultural institutions or by the party committees themselves. Originally each float could contain only two people whereas now they accommodate more. The queens of the fallas are of course taking part in the festival and parade in waggon pulled by horses.

During this battle, tons of flowers of all kinds are thrown. If people in the street consider it a real "battle", people in from the floats prefer throwing the flowers with style. 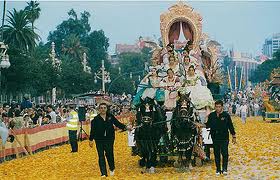 In 2010, the procession counted 43 cars. The floats have been prepared a month earlier, after having presented a design project to the community and obtained her approval.

The best tanks wins a prize. The judges look at the design and flowers arranging. Usually, rhe most popular flowers are dried leaves like ones of the coconut.

Do not miss the next flowers fight on July 24th  at 20h in  Alameda.