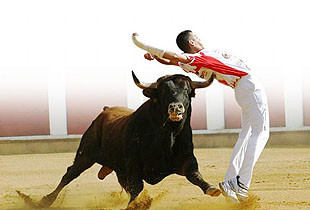 The race recortadores are a form of bullfighting practiced mainly in Northern Spain (Navarre, Aragon, Castile-Leon, Basque Country, Valencia Autonomous Community or Murcia). We can consider that it has its origins in bullfighting of the mid-nineteenth century.

We called Recortador the toreador, who, with help only from the body or with a simple device like a stick used as a pole (garrocha) performs twirls in front of a bull, a steer or a cow running toward him, or jump over the side dodging the horns of bulls. Everything is done without a cape or tied to his arm.

This type of bullfight, presented as a performance is an old tradition that originated in Spain and began with the first bullfighting in the streets or the arenas of mainstream entertainment. Competitions are organized to elect the best recortadore.


Some anti-bullfighting are not opposed to such practices because they do not hurt the animal and man and the Bulls are on an equal footing.

In Valencia, the competitions are held during the famous Las Falles festival in March.