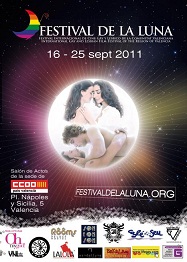 From the 16 to the 25th of September, Valencia held the second edition of International Film Festival Gay and Lesbian Valencia, also known as Moon Festival. The event, which aims to promote respect for diversity among the Valencian society is organized by the same sponsors of the thematic festivals LGBT (lesbians, gays, bisexual and transgender).


In total, the moon Festival shows 14 films and 22 short films. The projections are performed in the auditorium of the Workers' Commissions in Valencia (Plaza Naples and Sicily, 5), 20:00 and 22:00 sessions. The ticket price is 5 euros per session, and there is a subscription of 6 tickets for 25 euros. More information on site of the Festival.