Valencia has its own football team. The team has the same name than the city and was founded in 1919 with its first president as Octavio Augusto Díaz Milego, elected by the toss of a coin.

The Valencian football club plays its matches in the Mestalla stadium which opened in 1923 and has a capacity of 53 000 spectators. Until 1923, Valencia played their home games at the stadium Algirós, now destroyed.

The first match played at the Mestalla pitted the Valencia fc againt Castellón Castalia. It ended with a nil-all draw. The next day Valencia won 1-0.

In 2009, the team was supposed to be transfered in a new stadium that has been built in the northwest of the city. But because of the team's financial problems, the work could not be completed  and the Mestalla continues to be the seat for the matches at home of 'the city's beloved football team Faller.


The Valencia is the third richest club in Spain after Real Madrid and Barcelona but struggled to shine as in some past eras. The current president is Manuel Martín Llorente. 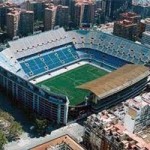 In the Mestalla stadium, you can make a tour of 45 minutes for only 6 euros or 5 if you are in a group of at least five people. Those tours are oganized on Saturday and Sunday from 10 am to 2 pm and can be booked prior by filling a form which can be found on the official website of Valencia cf. If you do not book in advance, you can make the tour only if there are places available.