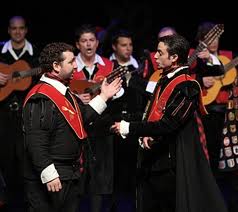 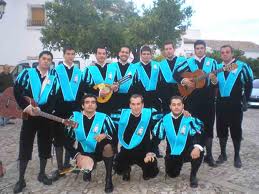 The tuna is an academic activity in Spain, also very present in Valencia, of a cultural nature designed to preserve the traditions inherited from the Spanish students of the 13th century.

The Tuna is exclusively for young men. Year after year, college students meet each other in this group and share their love for the Romanticism, the night, the music and travels.

The name "Tuna" comes from theword of "tunante" which pejoratively refers to the students making noise during the night and wandering playing and singing songs.


Originally the Tuna, was made for the students who, because their economic condition, could not afford to go to university and were trying to find a way to earn some money. It is said that they used to join the group to earn a bowl of soup (sopa) and that the name  sopistas remained to designate them.

Nowadays, the Tuna has lost its original function of survival and university students (in general, without money), it is about meeting people to talk about tradition, music, travel the world and play and sing with the Tuna.

Dressed like at the time of the birth of the Tuna, students play folk songs with instruments similar to those used in ancient times, the guitar and mandolin, and go sowing happiness wherever they go. They are often called at weddings, private parties and other celebrations.