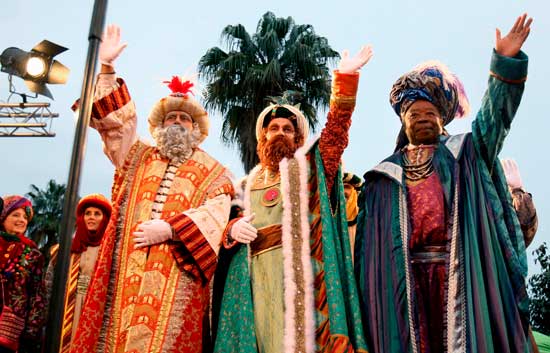 The day of the Reyes Magos

On 6th of January is celebrated, in the whole Spain, the day of the Reyes Magos. The Reyes Magos - three kings in english - are, according to the tradition, the kings who, coming respectively from Africa, Asia and Europa, arrived to Bethlehem with presents to the newborn Jesus.


Even though the recent introduction from the United States of Santa Claus, the spanish tradition tells that the Three Kings are  to bthe ones who bring the Christmas presents to the children.  After having written their wishes in a letter, Spanish children leave their shoes somewhere in the house during the night of 5th of January, to find it, the day after, full of presents or, if they were bad, full of sweet carbon. Then the Spanish families have breakfast with the Roscón de Reyes, a typical cake.

In some cities is organized a procession, called Cabalgata de los Reyes, during which the kings parades on horseback.