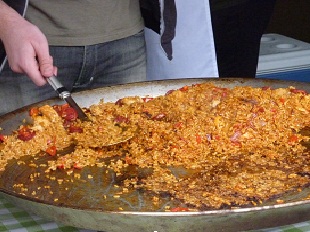 The paella is a dish made with round rice in the region of  Valencia. It derives its name from the Catalan word which means the pan used to cook it . It is not uncommon at certain times to see the paella cooked in huge quantities during gargantuan banquets.


The Paella of Valencia has become famous worldwide. You can find it on the menu in many restaurants. But the real recipe for paella remains unknown. The paella of Valencia is much more than a dish with rice. There are hundreds of recipes, which each is marked by the culinary traditions of the region where it is produced.

It is said that the Paella was originally a peasant dish that was cooked directly in the fields and shared in the same pan using wooden spoons. Contrary to popular belief, the paella of Valencia is made with seafood, duck, small snails, chicken and rabbit. In reality, the basic ingredients were all what the peasants could find nearby, mostly small snails in the fields because it was just the cheapest. Only on rare occasions they added duck and chicken for the preparation of the paella.

For the tasting, we advise you to look for good arroceria.