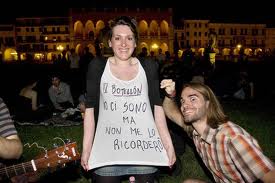 The botellon is certainly one of the first Spanish customs to which you will be confronted.
Every weekend, Valencia sees its beautiful streets filled with young people and alcohol. Teenagers and young people in general are very fond of this cheap way to get drunk. They arrive on the street with bags full of bottles of alcohol bought at the supermarket a few hours earlier.Then they distribute some plastic cups and poured the alcohol mixed with any soft drink. The "party" begins in the street after midnight, they drink, talk, some needed it to overcome their shyness, and smoke cigarettes and drugs. Then they stood in line to enter a dicothèque or bar to continue partying until dawn. 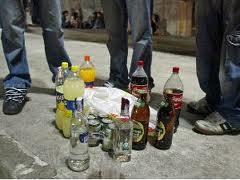 The phenomenon has spread since years and young people see it as a way to meet new people, to have an important conversation more relaxed and uninhibited, all without spending too much money. They end up spending as much money in the supermarket as if they had been drinking in a bar in smaller quantities. So that makes the managers of the supermakets happy.

This phenomenon has already generated a lot of social problems such as increasing alcohol abuse among children and youth: Spain holds the record in Europe of greater alcohol consumption.


Some areas of Spanish cities became uninhabitable because of the youth groups who have elected neighborhood. Shouting, fighting, repeated accidents ... This practice not only prevents the neighborhood from sleeping at night but it also leaves behind many traces in the morning, broken glass, plastic cups, cans, not to mention the various fluids. Some cities have tackled the problem by banning botellón in some areas and allowing it in others, such as in isolated suburbs. But young people also have found a solution to these decisions: doing botellón in the parkings, leaning against the hood of a car.

In February 2002, the Interior Minister has proposed a law that prohibited antibotellon alcohol in the streets and regulated the hours of alcohol sales. But this project was not approved. The Autonomous Communities, however, were ready to take action. 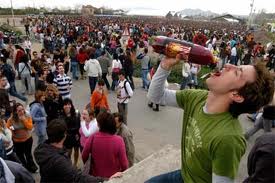 The Community of Valencia is the most strict and prohibits the consumption of any type of drink (including non-alcoholic) in the street, unless exceptional event. Take care not to violate the law, because even if you can see many botellon in Valencia, the police watch and a fine of up to 300 euros.